Oh yes, i’ts a nice quote from one of the best movies ever made. The Big Lebowski. In the movie the quote was reffering to a rug. When it comes to this blog post it’s about a canvas print.

When I was over in Canada to visit the Harveys, Dave showed me an awesome picture he took back in 2009. It was of a Vancouver covered in fog, but if you went up to the mountains you could see some of the skyline above the fog. I fell in love with it instantly.

So now I’ve been seeing this picture in my head almost every day, well not every day, but lets say every week anyway. And a couple of days ago I realized what I had to do. I had to print it on a canvas and put it up on my wall.

I asked Dave if he had a version of it with higher resolution than the one on his Instagram and asked if it was ok for me to put it up on my wall. He found a version of the picture that would work well for the print and gave me his OK. Now there was no turning back!

Today it arrived and I am very pleased with the result! 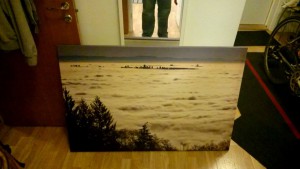 And there it’s up on my wall. It looks way better in real life though, but it’s epic. One could say that…

It really ties the room together!

Thank you Dave for letting me use your awesome picture, I truly love it!